Contemporary property developers and homeowners are looking for conservatories and orangeries which maximise light within the home and compliment the transition between the house and the garden. 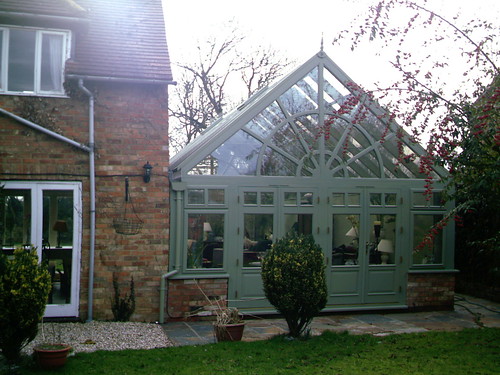 Here we look at a selection of the best conservatory designs in the UK, which have either been added as an extension to a house, to replace an old conservatory or part of a Home Improvement.

Eugene and Christine's project was to build a grand bespoke conservatory to complement the Georgian countryside cottage they have owned as a holiday cottage over fifteen years. This was a grand project to build a two storey high conservatory adjoined to one side of the house. There design made use of the cottages external wall as well as the old farm wall that runs parallel to other side of the house. The conservatory acts as an external bubble and the eco-glass used means that it retains heat easily. They also built a balcony out of the master bedroom so that when they step outside they remain within the confines of the conservatory. The height of the conservatory makes it appear like a seamless attribute of the architecture, rather than an extension. Furthermore when on the ground floor you have so much space and light above your head it really feels like you are outside. The large French windows are great for allowing air and energy into the space.

The architects who designed this beautiful orangery at Patrick and Margaret Flynn's current house made advantageous use of their long stretched out garden. Running along the length of one side of the garden this orangery is like an extended greenhouse. However the strong foundations, wooden floorboards and timber frame give it the structure and confidence of a residential home space. I am really impressed by the use of space. Along the sides of the orangery are a range of flowers and vegetables growing, including an impressive herb and salad garden for fresh cooking. The central space has been prioritised for household activities. Where the orangery joins the house there is a dining table and gas barbecue with a flue. As we move down the orangery there is a comfortable seating area and at the very end a ping pong table which appears exceedingly popular with the young residents of the house.

Matt and Edwina's small two up two down cottage in Devon is beautifully complemented by this bespoke conservatory. It is a particularly modest design employing a slender white timber frame. The conservatory is not attached to the house but rather situated on a small hill at the bottom of the garden. On the top of the hill a small dining table has been placed allowing Matt and Edwina to entertain guests with a view of both the house and the Devonshire countryside.

AUTHOR BIO: Idania Silvia is a scholar and critic specialising in contemporary and twentieth century architecture. She regularly writes features and articles on customised extensions and architectural additions and is currently writing a book about the current trend for bespoke conservatory in the UK.